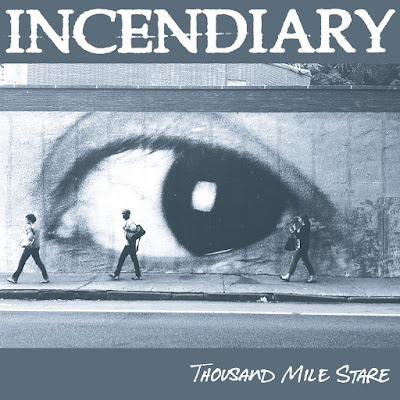 Incendiary’s rose to fame was with their previous full length Cost Of Living which as you know I heavily backed. Even if hardcore fame doesn’t mean much in real life, they still deserve it cause it was beast of a record. And it’s coming from a person who don’t get that whole 90’ new school nostalgia happening now. Truth is, many bands are jumping on the bandwagon and most of them suck. Not the case here, Thousand Mile Stare sounds like these dudes been on heavy steroids doses when writing this shit.

Cost Of Living was solid, but Thousand Mile Stare is a marked step up. Everything that was good about that old record is even better here. If you remember bands like Indecision, Earthmover or Earth Crisis this album sounds comfortably familiar, but it’s not like they act like last 20 years in hardcore didn’t happen. You can sense they put much thought into shaping these tracks as they use tons of different elements. The band turns in a quality performance with heavy ass chugging riffs and massive stomp parts with maximum effectiveness. When it hits right it’s powerful and ferocious, but there are moments that feel overlong or too complicated. I’m too basic for some of that but I guess it’s what 90’ new school is about.

A separate salute should go to the vocals, not only because of his on point delivery, but also things being said on the record. Maybe not the strongest voice in hardcore, but he’s putting 100% into it. That I respect. And the lyrics are highlight here. The older I get, the more I appreciate stuff that makes me aware about shady shit going on in this world. Fuck apathy, you gotta keep your mind sharp! The political edge in hardcore in recent years has been either absent or reduced to some butt hurt drama over what Gorilla Biscuits said. Or joke bands like Wolf X Down. Incendiary brings more common sense with their politics and it feels the lyrics are based on actual research not tumblr. Whether dealing with topics like how profits rules everything and our lives reduced being to numbers, the lyrics always express devotion to being aware of the forces that be. The key message is that things are looking bad for this generation and it’s going to be even worse for our children. I’ve been telling the same for a long time and it’s good to know other people are feeling the same about where we’re heading. Too bad today’s youth is too stupid to figure this out. Maybe if they weren’t so busy filling pockets of the same people who shipped their very jobs to little kids in Asia, like Steve Jobs. I know he's dead but fuck him and fuck them too. There’s no hope for humanity.