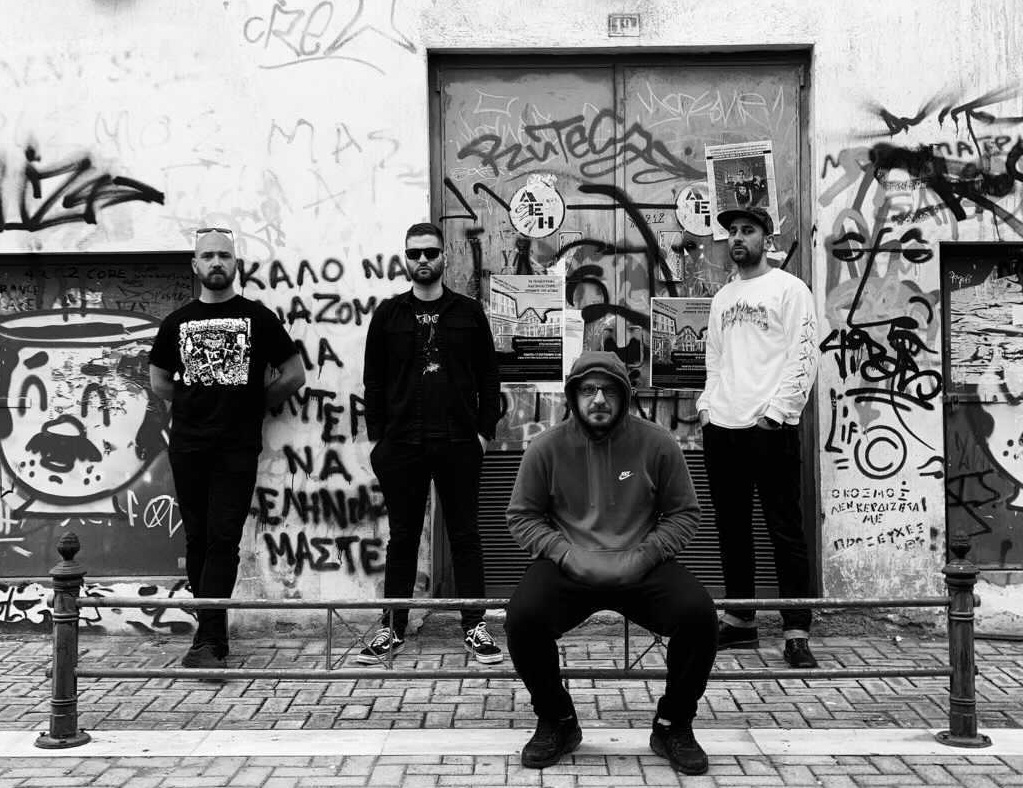 Ghetto Gospel are the new preachers of fast, attitude laden hardcore outta crisis-stricken Greece. The posse wasted no time and after just few weeks of jamming together in full conspiracy under the new Covid regime, they dropped a bomb in a form of The Price You Pay - nine tracks to check out if early Agnostic Front or SSD is your thing. Read the interview to learn more about the band and Greek hardcore in general.

To my knowledge, the story of Ghetto Gospel is short and straight forward - The Price You Pay is an outcome of just a few rehearsals. Is that correct?
Hey, thanks for the interview and for being interested in GG. Yeah, we started the band in mid December 2020, composed all songs and recorded them in a week or so.Then we sent the songs to Made In Hell studio that took some time to mix them properly. By mid January we had everything ready. It worked out really fast, faster than I expected, to be honest. Actually, we have never rehearsed in a real studio since we are not allowed to due to quarantine restrictions. We did everything at our drummer’s house (except of the drums that were recorded in a studio).

You all play in different bands, is Ghetto Gospel a side project or something more serious?
True, we are all active in various bands, some of us for almost 2 decades now. Our drummer is the youngest one, but he has been (and still is) involved in a dozen bands already! I dare to say that GG is a serious project and hopefully (when all this craziness ends) we’ll be able to reach out to more people with live shows, etc. That said, we don’t wanna set limits, deadlines or boundaries, we are doing this for fun first and foremost and we’ll see where it takes us.

The demo is 80’-styled in-your-face bursts of hardcore with most of the tracks clocking way below one minute mark. Was it the idea from the beginning?
Yeah, the main idea was to play raw and heavy, in your face, old school hardcore / thrash / punk / whatever, so the short songs do well for us. On the other hand, we never said let’s write a song that is 50 seconds or so, it came out kinda naturally. For me, long songs, when it comes to hardcore, are super boring, but that’s a different story.

Is there a theme that runs throughout your lyrics?
It’s all about every day life and my perspective of it. The lyrics cover sentiments varying from frustration, betrayal and depression to positivity, unity and fighting back. We are definitely sick of this society but let’s do something to change this.

Who are Tambores de Guerra and is the tape available yet?
TDG is a Madrid based tape label, that has already put out great releases of the Spanish scene, but also cassettes for some cool international bands, like Combust, Last Wishes or Blood Sermon. I am in touch with Yoshi, the guy behind TDG, since last year and he is a really nice person, super passionate for hardcore music. We thought that it’d be better to work with him to have that EP out instead of putting it out ourselves or do it with a Greek label (even though we got in touch with 1-2 in the beginning). It’s very easy working with him, so it was the right decision. The tapes will be available by the end of the February, limited to 40 red and 40 black ones, but most of them have been already pre-ordered or reserved, so you better get in touch with either TDG or us now! There’s a cool collaborative t-shirt between us and TDG and some tee / tape bundles, available too!

What’s the hardcore scene like in Greece nowadays in terms of bands, labels and venues to play?
Hm, tough one. I think that there’s a recession in the scene the last years; not many new bands coming up and old bands getting inactive. The DIY punk / post-punk / crust scene is blooming, though. But hardcore - wise (our style, USHC, etc.), not much is going on. Concerning the labels, there’s a handful of them working hard for the preservation of the scene, but not that many unfortunately. The same goes for the distros. There are some cool DIY venues in Athens and Thessaloniki (the 2 bigger cities), while lots of shows take place in squats, too (even though lately the state has evicted lots of them). There’s also the more ‘commercial’ shows taking place in professional venues. I don’t think that we lack of shows, there’s a lot going on, from big hardcore bands to small local gigs, but we definitely need more hardcore bands and more people to be active in the scene.

What’s the overall vibe of the scene? Is it rooted in punk rock, political or more into Nikes and merch or maybe something different?
As I mentioned above, yeah the scene is more rooted in punk rock and politics, DIY ethics, autonomous centres and anti-authoritarian mentality. Big corporations have infiltrated the worldwide hardcore scene since day one, so it’s hard to get out of it, after all we all live in a capitalistic system, so yeah you get your Nikes and your Vans and your North Faces, too, but the overall mentality is going against the flow and the current cultural status quo.

Who Really Killed 2pac and WHY?
I think we all know what killed him or better how the whole fight and shootings evolved, but I am not the one to investigate the whole scene, get away from me! Long live Tupac Shakur.

The Price You Pay is getting good reviews and lots of people are hungry for more. Is there any change for new music from you this year?
The response so far has been overwhelming, lots of great feedback! Thank you very much to all of you that showed love to The Price You Pay. We have already started writing some new songs, so expect more music sooner or later.

What do you hope for the band when the pandemic is over?
The one and only thing I cross my fingers for is to get back to shows soon and have the chance to perform live in 2021. Till then, stay safe and watch out for each other. Peace out.